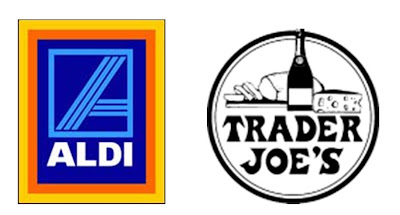 Today in my International Marketing Management course, Professor Susan Douglas mentioned that the famous "Aldi brothers", owned both Aldi and Trader Joe's. Just to get things clear, I did a little research into the relationship.

Trader Joe's is a chain of specialty grocery stores headquartered in Monrovia, California. They specialize in organic, vegetarian, gourmet, and frozen foods and attract young, urban, health-conscious shoppers. They also pride themselves on their eco-friendly message.

Aldi, on the other hand, is a discount supermarket chain, solely focused on delivering the lowest-priced products possible. The company is split into two divisions, Aldi Nord (Aldi North) and Aldi Süd (Aldi South). The northern division is headquartered in Essen, Germany while the Southern division is headquartered in Mulheim an der Rühr, Germany. My favorite fact about the store is that Aldi stands for "ALbrecht DIscount".

Who are the "Aldi brothers"?

Theo and Karl Albrecht. Theo owned and managed Aldi Nord, while Karl was in charge at Aldi Süd. Now, of course, they're both retired.

Do they own both Aldi and Trader Joe's?

Sort of. The 1,000 Aldi stores in the U.S. are a part of Aldi Süd, owned by Karl Albrecht. However, Trader Joe's is owned by a family trust of Theo Albrecht. While collectively as a family, they own both, the two entities in the U.S. are actually competitors, as they have no legal ownership ties.

So, there we have it! Another mystery solved!
Posted by Erica Swallow at 6:01 PM

Thanks Erica. Even though I am from Germany, I was only aware of about 30% of what you posted. I will have to watch out for Aldi in the US. Hope to buy some good o' German products :)

Thanks Christoph! I grew up with avid-Aldi-shopping grandparents. SO, this was of particular interest to me!

Wow, I have been doing the Trader Joe's for as long as I can remember (30+)...Original store is in Pasadena Calif. Fresh Orange Juice, my daily fix.

I'm not sure if these products are from Trader Joe's USA, maybe they want to introduce the Trader Joe's brand in Germany/Europe.

I'm in suburban Chicago and was shocked to find out that they were "relatives", as TJs is marketed as an upscale discount market, where ALDI is often in low income areas. However, I have started shopping at ALDI for some basics, and have been impressed with the quality -- and have noticed that many of the items have the same packaging as TJs, but a different brand name. Interesting...

In principle, a good happen, support the views of the author

It's actually not as simple as that.

First, ALDI is not "solely focused on delivering the lowest-priced products possible" but at delivering those low-priced products at a very high quality by reducing costs in shop design, advertisement, stocking etc. There is a consistent strategy behind this. Being well-informed, picky and thrifty is typical for the German middle class costumer and ALDI has matched this. You can read about it here: http://www.privatelabelmag.com/pdf/pli_spring2006/AldiTheUberDiscounter.cfm

Second, while ALDI Nord (Theo Albrecht) and ALDI Süd (Karl Albrecht) are officially separate companies, every German knows that the two businesses are incredibly interconnected and cooperate closely. (You can also read about it in the above linked article.) Most obvious to the costumers is that they share their suppliers so that you will find the same products in ALDI Süd and Nord, usually in the same packaging under another name.

Even though TJ belongs to Theo Albrecht's family trust and the US ALDI belongs to Karl Albrecht's ALDI Süd, it is therefore very probable that both businesses cooperate in sharing figures and details about suppliers.

By the way, products branded "Trader Joe's" are not only sold in German ALDI Nord shops. You can also find them in British ALDIs (i.e. ALDI Süd) from time to time.