How I Became an NY Times Olympian 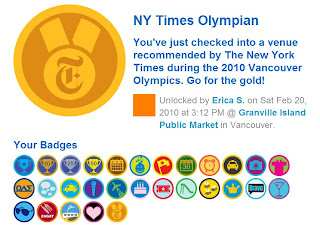 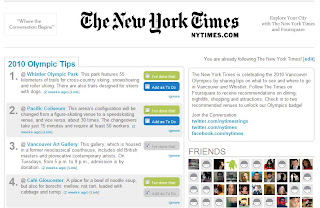 Above: The New York Times' Foursquare Page (http://foursquare.com/nytimes)
Last weekend, I took a long weekend trip to Vancouver, Canada to visit my friend, Dario. A week prior to the trip, I had no firm plans to go, but an interest in checking out the city during the 2010 Olympics. Not only that, I had just recently led The New York Times in creating a Foursquare page. Phase 1 of the NY Times presence on Foursquare was sharing a list of Vancouver tips during the Olympics. Vancouver Foursquare players following The New York Times had the opportunity to unlock the "NY Times Olympian" badge by checking into NY Times-recommended venues. As somewhat of a Foursquare fanatic, I was 95% sure that I NEEDED to go to Vancouver to get the first badge that I helped create. (Note: Kudos to Paul Lau, the incredible NYTimes designer who designed the Olympian badge!)
Dario and I were chatting and he asked if I'd be in Vancouver for the Olympics. That was the last straw - I had to say "yes". How could I miss out on such an opportunity? It was on like Donkey Kong. Within a few days, I booked my flight and had a place to stay (Dario and his biz partner, Ryan, were kind to let me stay with them!).
On my second day in Vancouver, I unlocked the official NY Times Olympian badge by checking into the Granville Island Public Market, where a few new friends and I ate lunch and waited in the Altantic Canada House line, before giving up and taking the AquaBus back to downtown Vancouver. Great times, though.
While in Vancouver, I had the opportunity to stop by a few NY Times-recommended venues including the Vancouver Art Gallery and Salt Tasting Room. I was hoping to make it around to Vij's Rangoli. That will have to wait for another time!
That, my friends, is the story of how I became an NY Times Olympian. See more photos of my time in Vancouver on Flickr now!
Posted by Erica Swallow at 10:18 AM

This is a very good story because I always want to become an Olympian, actually I tried it so it was so hard for me, I know it's a little bit hard because I'm a bit old, so I don't give up.m10m

How I Became an NY Times Olympian

This article is well written and quite informative.
More articles should be written and you have just found a follower.and more visit.
chilis offers