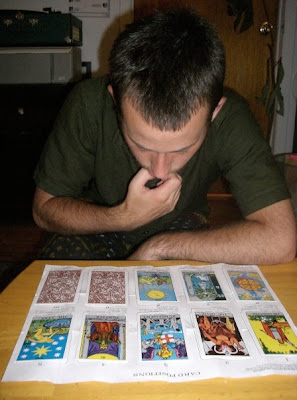 Every Tuesday night, my 2-out-of-3 best friends (Nicolas and Maria) and I have dinner. We alternate houses, visiting each person's place a week. (Note: The third best friend is Alice, but she's in China.)
This week, Nicolas (aka Nick) hosted dinner. The theme was summer. He made the most excellent tomato/basil/mozzarella appetizers and an incredibly tasty pasta salad for the entree. Maria brought the wine -- a rose and a white. And I supplied the desserts -- gelato and fruits. MMMM.

Nick's roommate, Hailey, happened to have a deck of tarot cards lying around and let us play with them. Luckily, they were beginner's cards with notes and meanings written on them. The deck even came with a piece of paper to place under the cards that told us what the placement of each card meant.

All in all, Maria's cards were excellent. She got the star... the empress... the awesome stuff... and all was well. Meanwhile, Nick read mine and I got all the crap! The hanged man... the devil... the moon. Ugh. It was horrible. Basically, my life sucks. But it turns out that everything is supposed to end well at the very end... so, only a lifetime of suffering left, and then comes the good stuff!

I learned a few things about tarot cards, though:
Overall, I'm not a suspicious person. However, it is kind of strange that I received all bad cards and Maria received all great cards. Maria and Nick attribute this to me cursing at the cards and ridiculing them while Maria was getting her cards read... they heard and were out to get me.

hehehe. This makes me want to get a Ouji board now!
Posted by Erica Swallow at 11:11 AM