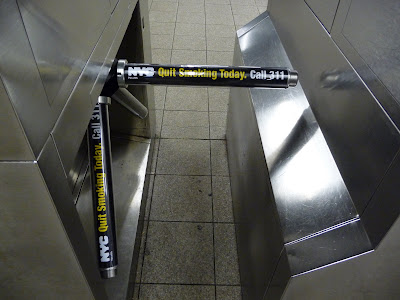 Above: A turnstyle at the 14th Street - Union Square subway stop that advertises
On March 30th, the NYC Health Department began a new campaign for targeting parents who smoke. The official press release points out the danger of smoking as it relates specifically to NYC parents:

About 400,000 New York City adults who smoke live with a child. Sadly, smoking takes the lives of 8,000 adults each year in the city, many of whom leave children behind. New Yorkers are urged to quit smoking and to call 311 if they need help.

The campaign launch a television commercial that "features a young boy in a train station who has lost his mother. He is terrified and begins to cry. This painful moment shows the viewer how vulnerable a child is when a parent risks their life by continuing to smoke – and how scary the death of a parent would be." The commercial is a licensed version of one created months ago in Australia for quit.org.au:

You can see the entire campaign on nyc.gov/health.

As a part of the larger campaign, they feature turnstyle advertising, as shown above, in NYC subway stations. The ads are definitely eye-catching, as I've never seen this type of promotion. Furthermore, they feature a prominent comment: "Quit smoking today."

This is definitely a good cause. We'll have to wait to see if other advertisers start using this same medium in the future!
Posted by Erica Swallow at 7:35 PM

Does that commercial make you cry? It made me tear up, definitely. Way for the government to pull our heartstrings...

Unfortunately, I don't that this commercial will get people to stop smoking. I know from experience that for some people who chain smoke having a son with severe asthma isn’t enough to make them quit smoking. They are too selfish in their addiction. My ex-wife was that way with our son.

My brother has asthma, as well, and my parents continued to smoke. I guess you're right. An addiction is an addiction.

Nonetheless, the commercial is pretty heart-wrenching.