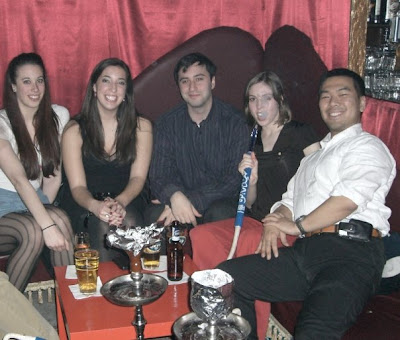 I remember the first time I heard about hookah. I was a freshman at NYU, and it was the first night that I had spent in my dorm room. To get to know each other, my freshman floormates and I went out that night. My roommate suggested that we go get hookah. Of course, being the sheltered freshman that I was, I had no clue what hookah was. She explained and I said that I would come but that I wouldn't try it. So, I stayed true to my word. It wasn't until about a year later after much research on it that I finally tried my first hookah.

Now, it isn't uncommon to see my friends and I out at a hookah bar, lounging and catching up. One of my favorites is Horus Lounge II, located at 510 Laguardia Place (between Bleecker & Houston) in New York City. They have belly dancers on Thursday, Friday and Saturday at midnight, and have really fresh hookahs.

Unfortunately, my favorite hookah bar in Manhattan closed a few years ago. It was called Crazy for Leila. I loved the atmosphere of the place, especially because the owners were so nice. Gabriel, one of the owners from Egypt, always called me Princess and treated all of my friends and I like family. Luckily, he opened a new hookah bar in Astoria, Queens called Fayrooz Cafe & Hookah Lounge. If you're ever in the area, check it out! It's located at 28-08 Steinway Street (at 28th Avenue). They also have belly dancing on Friday and Saturday nights at midnight. They have 36 flavors of hookahs!

If you're an extreme Manhattanite that nevers make it outside of the borough, you can always check out Sahara East, too. Many claim that its the best hookah bar in NYC. Even New York Magazine thinks so. I believe that Sarhara East was the first hookah bar that I went to on that Freshman night that I described above. Oh the memories.

If you have any questions about hookah or hookah bars in the City, let me know!
Posted by Erica Swallow at 1:35 AM

Sahara East and Horus Lounge are very nice place indeed... I used to hang out there with my friends...
ah... good times..

Thank you so much for sharing this informative post.. Stay blessed!!
blow dazzel

I found hooka at best karaoke bar nyc venue too. We spent an awesome night there and wishing to enjoy our another day at the same venue.