50 Years of Resistance for Tibetan Women 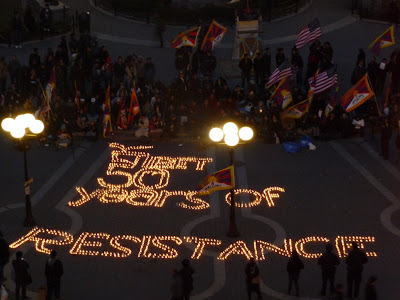 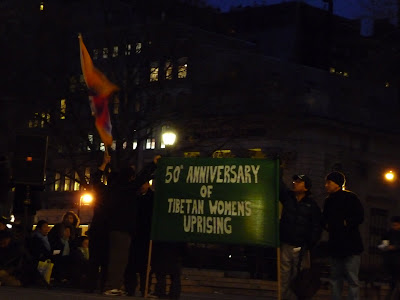 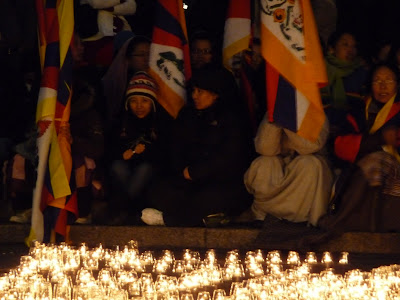 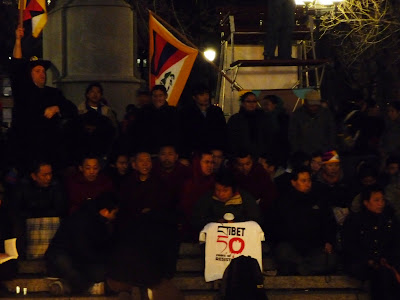 Many people know about the significance of March 10, 1959 for Tibetans. It was the day of the Tibetan National Uprising against Chinese occupation. But it wasn't until last night when I learned of the importance of March 12th in Tibetan history.

On March 12, 1959, thousands of Tibetan Women gathered in Lhasa to protest the Chinese occupation. Since that day, March 12th is commemorated as the 'Tibetan Women's Uprising Day'. Each year, the Tibetan Women's Association organizes protests on that day. Last night, I encountered one of their protests at Union Square in New York City.

From above, I watched as they lit candles that eventually spelled the words "Tibet. 50 Years of Resistance". I decided to get more involved in the action to see what was going on. That's when I found the green banner marking the event. A group of monks sang hymns and masses of protesters sat in the cold behind the memorial candles.

I first learned about the magnitude of the uprising and worldwide protests on March 10th, 2007. Here's a historic account as written on that day to the NYU Students for a Free Tibet:

I woke up this morning in my dorm (at Broome & Center St in NYC) to a sea of Tibetan flags and thousands of marchers outside of my window. Signs said, "Free Tibet", "One World, One Dream. Free Tibet", and "Boycott the Beijing 2008 Olympics". I started taking videos and ran outside. Luckily I was late for work, or I wouldn't have seen this protest. On the 6 train to work, I saw a woman in traditional Tibetan wear, and asked if she was a part of the protest. Indeed, she was. She had escaped from Tibet one year ago to India, where she had bought a passport to come to the U.S. under political sovereignty. Her family was left in Tibet, and she may never find them. Her story touched my heart, and I wanted to share it with you.

From that day, I decided to get more involved in actively learning about the conflicts in Tibet. I must say, though, that I'm afraid to get involved, because I'd like to work in China some day. I think you all know what I mean.

Has anyone else out there gotten involved in the Tibetan uprisings? Please share your stories!
Posted by Erica Swallow at 12:32 PM